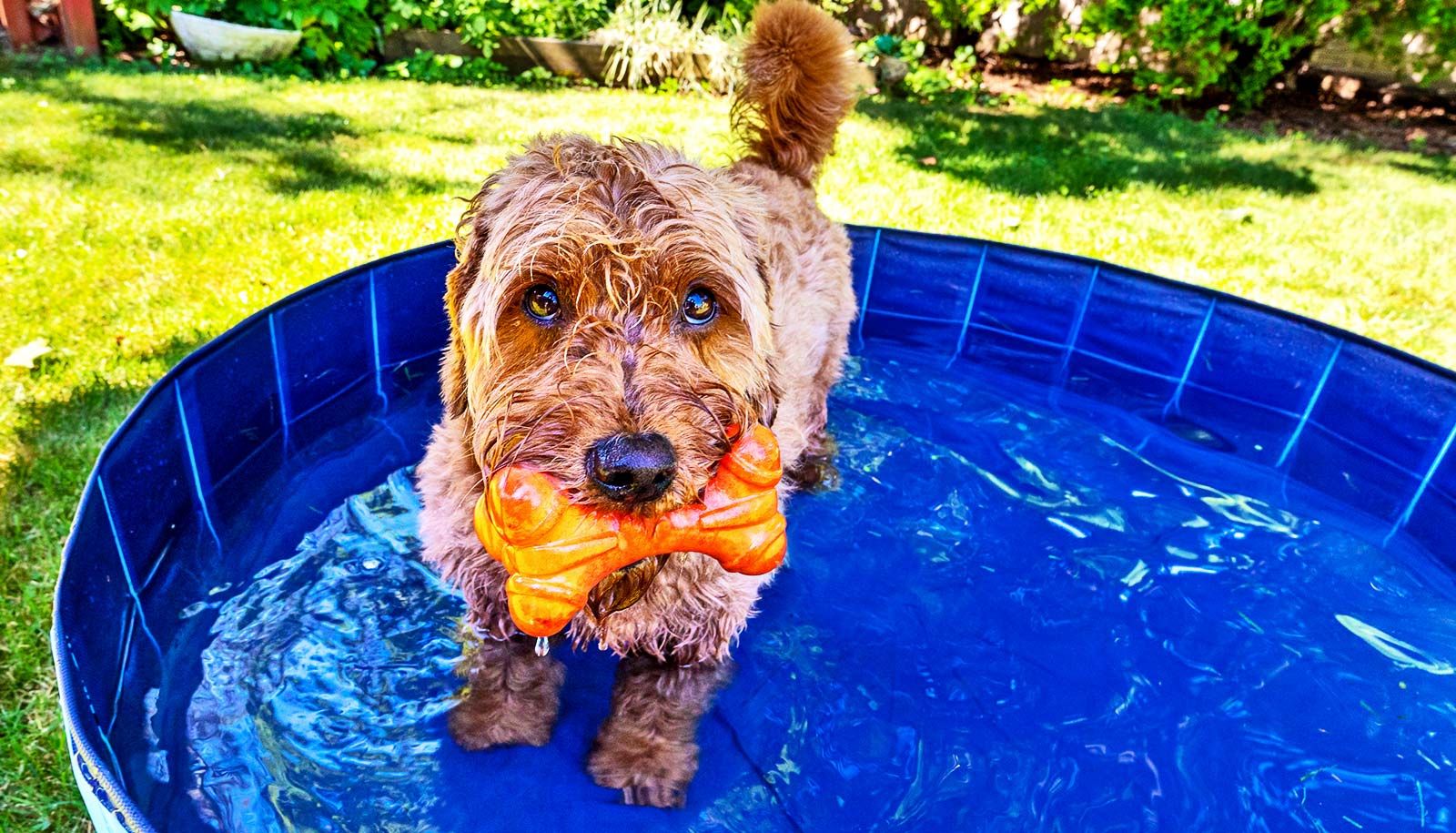 6 tips to keep your pooch cool on hot summer days

You are free to share this article under the Attribution 4.0 International License.

It may be the so-called “dog days” of summer, but in areas that experience extreme heat, summer is not the time to hang out with your four-legged friends.

It’s Saturday afternoon. Your weather app reads 105 degrees. Your dog looks at you expectantly, hoping for a walk. What are you doing?

Step off the leash, says Sarah Carotenuto, an assistant professor of practice at the University of Arizona College of Veterinary Medicine.

“Dogs don’t sweat like we do. They have a very limited ability to dissipate heat, so they’re more prone to overheating than we are,” says Carotenuto, who worked as an emergency vet in Arizona for 15 years. “Granted, we wouldn’t go out in a fur coat to exercise, but that’s exactly what we would ask them to do.”

As the temperature rises, the risk of heat stroke also increases, which can be extremely dangerous for dogs.

“Heatstroke is like frying an egg,” says Carotenuto. “Once the body temperature goes over 109 degrees, it’s like an egg white: you put it in the pan and it cooks and turns white. And it is really difficult, if not impossible, to return this egg white to a liquid state.

“This is what happens in the body when dogs are overheated to the point of 109; their proteins basically start to cook. It’s very, very, very dangerous, and it’s super hard to get the dogs back after that.

But just because it’s hot outside doesn’t mean your dog should be cooped up and bored all day. After all, exercise is good for your dog’s mental and physical health.

“Things to engage the mind and engage the body are good for all species,” Carotenuto says. “Without it, we might see dogs develop repetitive behaviors, similar to zoo animals pacing around their enclosures, or destructive behaviors, like chewing on the couch or pawing at the wall or barking at the door incessantly and giving back. crazy neighbors.

“It’s really important to engage both mind and body to prevent these kinds of behaviors from developing.”

Here, Carotenuto offers six tips to ensure your dog stays cool while safely exercising and being mentally stimulated during the summer months.

In many communities, dog daycare centers provide indoor playgrounds where puppies can run around and interact with other dogs. Some even have indoor pools and agility courses. Dog owners can pay to drop off their pooches for a few hours of supervised, air-conditioned exercise. Carotenuto specifically recommends facilities that separate dogs by size.

Garden sprinklers or kiddie pools can be a lot of fun for water-loving puppies. A regular garden hose can also work, with a caveat: some dogs like to smack in the water, which can lead them to ingest too much. So be careful, said Carotenuto.

If you have a large pool in your backyard and your dog likes to swim, this can also be a great exercise option. But not all dogs are swimmers, so make sure you know your dog’s abilities before you let your pup into the pool. And just like children, dogs should never be left unattended in or around water, says Carotenuto. It’s also important to make sure your dog has an easy way to get in and out of the pool. For added safety, dog life jackets of various sizes can be purchased from pet retailers.

Throwing a ball indoors, investing in indoor puzzle toys for dogs, or playing hide and seek with favorite toys or treats are easy and fun options for engaging dogs mentally and physically. Many dogs, like their feline counterparts, also enjoy chasing after laser pointers, Carotenuto says. She encourages people to “think like a zookeeper” to come up with creative indoor activities.

“Zoo keepers deal with it a lot, where the animals get used to their surroundings and get very bored with the same old things,” she says. “So you can think about enrichment activities. Can I give them something to chew on, or is there something they might be looking for, like a favorite toy? You could move it around the house and ask them to find it, much like “Elf on the Shelf” but for dogs.

4. If you go out, time passes appropriately

If you do decide to walk your dog, very early morning and late evening hours are usually the safest times to do so, Carotenuto says.

“There’s a reason coyotes hunt at dawn and dusk because that’s when it’s possible to do so,” she says.

A good way to determine if it’s too hot for a walk: test the pavement with your own hand.

“If you can’t put your hand on the sidewalk for three to five seconds, you shouldn’t walk your dog on it.”

Speaking of hot pavement, burns to the pads of the paws are among the most common heat-related injuries sustained by dogs, says Carotenuto.

“On average, the pavement is 40 to 60 degrees warmer than the ambient air temperature, so if the temperature is 100 degrees, the pavement will be 160 degrees,” says Carotenuto. “Pads are made for walking, but not in this heat. When the pads burn, they come off. Imagine walking around with raw feet that have no protection; it is excruciatingly painful.

While there’s no way to avoid having your dog on the sidewalk during the day, protective footwear is a must. Slip-on silicone booties, which can also be found at pet stores, are real paw protectors. And while it sometimes takes dogs a while to get used to wearing them, they will get used to them.

Although extreme heat is not safe for any dog, some breeds are more susceptible than others.

“There are a few breeds that you have to be very careful with during the summer, and those are flat-faced dogs – like a pug, a Shih Tzu, a French bulldog, an English bulldog – all of these dogs have even more difficulty dissipating heat due to their anatomy,” says Carotenuto. “Arctic breeds—essentially anything that was supposed to be a sled dog—also tend to have a bit more trouble because they have a very thick that helps retain heat.”

You should research your dog’s specific breed to better understand how they might be affected, says Carotenuto.

Empower your child to beat obesity