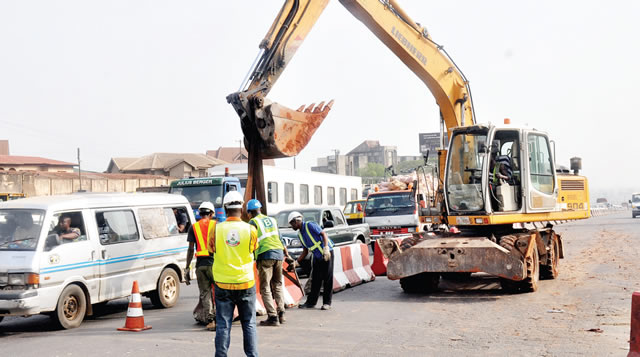 THE contempt of public authorities for Nigerians is replicated on the 127.6 kilometer long Lagos-Ibadan highway. The resurgence of traffic jams on the nation’s busiest highway due to ongoing road repairs in the Otedola-Secretariat section reflects the federal government’s disregard for its citizens. While traffic slowdown is inevitable with road rehabilitation, serious efforts to improve it have been absent.

While the Federal Ministry of Works and Housing did little to alert commuters to the resumption of work on this stretch, it was the Lagos State government that announced its traffic diversion plan. on the eve of the June 9 start date. The repair should take six months. Based on the experience of the past nine years when the rehabilitation began, commuters, businesses and residents are ready for a hellish half year.

A report by The PUNCH captured the excruciating agony of commuters stuck in traffic due to the demarcation and road diversions erected by contractor, Julius Berger Plc. In the absence of an effective arrangement for traffic control or law enforcement, impatient motorists form several additional lanes on the main carriageway and on the sides, thus congesting the narrowed section of the road. The most lawless drive recklessly against oncoming traffic without challenge. Leading the lawlessness are the police, military and other security personnel. Thieves frequently attack commuters.

Similar suffering was inflicted on commuters using the expressway from the Ibadan Toll to the Iwo Road; the Ife-Ibadan highway to Ibadan and the Asejire-Ikire section of the highway.

Building, expanding, repairing or rehabilitating roads are normal government activities everywhere. Reportlinker.com, a market research firm, pegged ongoing road construction projects worldwide in 2020 at $2.54 trillion, with the Asia-Pacific region accounting for $1 trillion. With its inadequate road network of just under 200,000 kilometers of which only 60,000 km is paved (most of it dilapidated), the imperative to build new ones and rehabilitate existing ones by Nigeria’s three levels of government is unassailable.

But Nigerians are doubly underserved: only some of the existing roads are rebuilt, new ones are painfully few. Worse; federal and state officials and contractors treat commuters with contempt when repairing the few highway projects they undertake because the repairs take so long. This contrasts sharply with global best practices.

Development economists regard road infrastructure as the most important of all public goods. World Highways explains: “Roads provide access to employment, social services, health and education, making a road network crucial in the fight against poverty. Roads open up more areas and stimulate economic and social development. Therefore, although road rehabilitation should always be encouraged, it should be undertaken with due regard for commuters, businesses and the economy. Even dictatorships are making strenuous efforts to reduce commuter anguish, but in Nigeria, federal and state governments simply don’t care.

It is curious that the Minister of Works and Housing, Babatunde Fashola, the ‘poster boy’ for the orderly management of road construction and traffic when he was Governor of Lagos State (2007-2015), now oversees the outrageously callous federal works bureaucracy which, along with its contractors, abuses Nigerians with impunity.

Thanks to the strong institutional framework it has built, Lagos still stands out among other states and the federal government in responsible management of road construction. Announcements are made well in advance and traffic and safety agencies are mobilized to ensure safety and efficient traffic management.

But outside of Lagos, it’s a chaotic jungle during roadworks. On the Lagos-Ibadan highway, FMW&H and the two construction companies dealing with its rehabilitation, Julius Berger and RCC, have become notorious for inflicting suffering on the population with their cavalier blocking of roads (including entrances residential and business areas) with no notice, few road signs to guide movement, no major effort to hire traffic management officers and enlist security guards.

We hold Fashola responsible. It is his duty to mobilize the department, liaise with federal and state safety and traffic management agencies to ensure easier travel and safety on federal highways under construction. He should take the necessary steps today.

Governors, through whom state federal highways being rehabilitatedation passes through, should also coordinate with FMW&H, contractors, police, Federal Road Safety Corps, and various special security teams and together provide 24-hour surveillance, presence, and traffic management. Being a federal jurisdiction, state traffic agencies should be strictly limited to providing freer traffic and leave enforcement to the police and FRSC.

These countries also use the technology. China has added 10,000 kilometers to its network every year since 2011 and uses electronic signs to guide drivers and pedestrians.

In Nigeria, officials and individuals further torment citizens by sounding sirens in traffic, moving with overzealous police and soldiers wielding guns and riding crops who harass other road users to make way for them.

Nigerians should start resisting oppression and systemic dehumanization. Residents and businesses living along the Lagos-Ibadan highway and the Ife-Ibadan highway should form community development associations and, using mass media, draw attention to the chaos. They must file petitions with local, state, and federal governments, including state houses of assembly and the National Assembly. Until citizens put pressure on the government and act as catalysts for change, their oppression will not diminish.

Launched in 2013, the Lagos-Ibadan rehabilitation project has dragged on too long despite receiving additional funding from recovered “Abacha spoils”; it should be finished without further delay.

Skills are key to reducing unemployment and migration in rural India