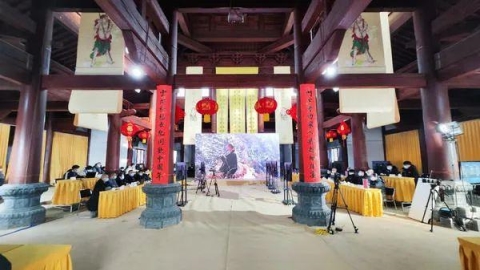 A global online kung fu competition hosted by Shaolin Temple in central China’s Henan Province, the birthplace of Shaolin kung fu, has attracted more than 5,000 enthusiasts from 90 countries and regions.

29-year-old Marta Neskovic from Serbia was awarded the Women’s Yizhaogong, or Shaolin kung fu “one move”, due to her superb performance.

Influenced by her mother, Neskovic became interested in Shaolin and Chan Buddhism when she was little. The different cultures were fresh and new.

Neskovic, who is also an anthropologist, had practiced martial arts before coming to the Shaolin Temple in 2018 to receive vocational training.

“I stayed for two and a half years, I love kung fu so much. Practicing kung fu is good for mental and physical health,” she said.

Shaolin Temple has held exchange and interaction activities with its fans around the world over the years. About 2,000 foreigners come to this 1,500-year-old temple every year to learn kung fu and experience Shaolin life.

“Affected by the COVID-19 pandemic, Shaolin Temple held an online competition this year, providing a platform for foreign kung fu enthusiasts to participate,” said Shi Yongxin, abbot of the temple.

Participants applied for the contest online and uploaded videos, which were scored by professional referees. In some videos, family members joined in and villagers gathered to watch.

Austrian Werner Preining, 81, was one of the oldest candidates. He started learning kung fu eight years ago and has visited China four times.

“I like kung fu a lot because it’s become part of my lifestyle now,” Preining said.

The competition promoted the exchange of Chinese culture and other cultures through Shaolin kung fu, said Andreas Riecken, Austrian Ambassador to China, in a congratulatory letter.

The results of the online competition will be released in early March and the first prize winners will be invited to Shaolin Temple for a real experience.

Calls on Norwich schools to do more on county lines