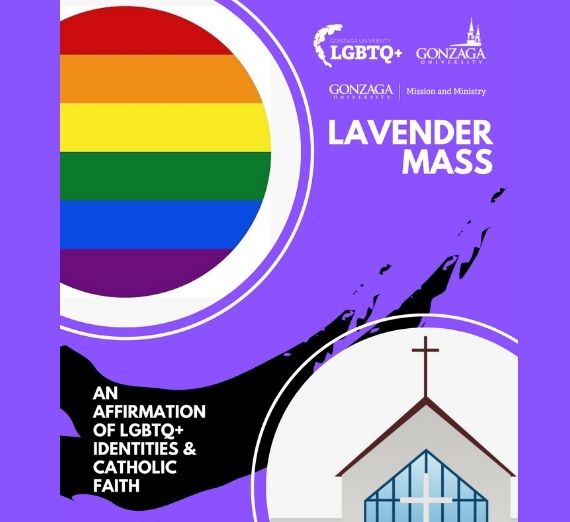 Lavender Mass is an annual celebration at Gonzaga University focused on affirming and supporting members of the campus LGBTQ + community through faith. This year, it was celebrated in the afternoon of Thursday, October 7. The Lavender Mass (formerly known as the Mass of Compassion) has been held every fall for over a decade, providing a collaborative opportunity between the Lincoln LGBTQ + Resource Center, Mission and Ministry, and various Jesuits on campus. In a particularly controversial time like today, it is important to recognize different perspectives with respect and to ensure that our work is grounded in our University’s mission to recognize the dignity of all and spiritually develop our students.

This religious gathering provides a space for people who may have felt they had to choose between their LGBTQ + identity or their faith, as well as a space to heal from trauma, an introduction to Catholic Mass, or an invitation to the community. Although this is a Catholic service, people of all faiths and spiritualities are invited to celebrate the Catholic and Jesuit values â€‹â€‹of Gonzaga University, while recognizing the struggle to truly love one another unconditionally. Lavender Mass President Fr. Pat Conroy said in his homily that too often Catholics attend Mass and hear the words of Jesus, but fail to authentically live these values, including caring and connect with people on the margins of society. Such reminders are crucial for our spiritual and intellectual health. Every individual sometimes needs to stop, reflect and be attentive to the actions we are experiencing rather than the words we are professing.

Lavender Mass is scheduled each year in the run-up to or on the day of the National Release, an annual LGBTQ + awareness day observed on October 11, which encourages lesbian, gay, bisexual, transgender and queer people to live openly and authentically. . Great strides have been made towards equity and inclusion of LGBTQ + people, but discrimination, violence and ostracism targeting LGBTQ + people persist. Religion is sometimes used to justify these harmful actions, causing lasting damage to many members of the LGBTQ + community. Over the years, students of many faiths have said the Lavender Mass is important to them as they see the campus coming together to strengthen our beloved community. We must continue this work by creating an inclusive space and recognizing the work that remains to be done.