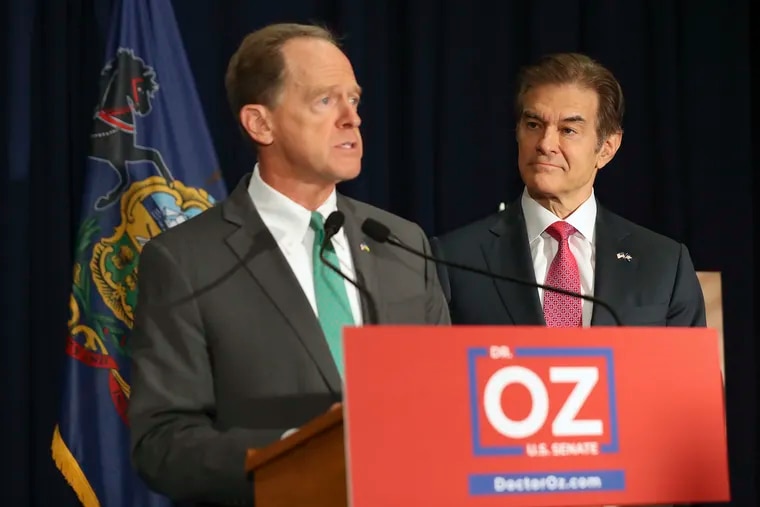 In Thursday’s op-ed, “Just right,” an attempt is made to equate Biden’s student loan forgiveness program with the mortgage interest deduction. There is no relationship between the two. The loans were contracted in good faith with a promise of repayment. The interest deduction simply allows buyers to keep some of their own income as an incentive to buy a home. No matter how you slice it, under the proposed plan, the loan payment is passed on to those who have never taken one or to those who have repaid theirs. —Stephen Hanover, Doylestown

Senator Pat Toomey’s remarks about Lieutenant Governor John Fetterman, as reported by The Inquirer, are so appalling that they require comment. Whether one supports Fetterman or not, his brief (which may well be temporary) disfluencies in speech do not render him “unable to communicate” or “unable to do the job”. As a result of the Americans with Disabilities Act of 1990, we as a nation have learned to make all kinds of reasonable accommodations for people with disabilities. It wouldn’t surprise us at all if, not too long ago, there were people who didn’t think Illinois Senator Tammy Duckworth, a double amputee, was “unfit to serve.”

Toomey’s denunciations hit a new low, even for him. —Barbara Gold and Stephen Gold, philadelphia cream

What a shame that talented rapper Bad Bunny chose to waste $50,000 on strippers and booze while visiting our city where so many people are in need. What impact that money would have had on a school, shelter, playground or food bank. Sad. —Holly Wright, philadelphia cream

Former President Donald Trump’s anti-democratic leanings were on full display at a recent political rally, as the Inquirer reported last Sunday (“Trump hits back at Biden in Pennsylvania rally”). Attendees at the rally were treated to a long rehearsal of various grievances that Trump had regularly touted for nearly two years.

In the editorial the following Tuesday, Inquirer readers were warned of the danger to democracy posed by Trump’s reckless rhetoric. This warning does not go far enough. Given Trump’s propensity for grandstanding, the Inquirer’s editorial board should consider a moratorium on Trump news regarding his over-the-top vitriolic attacks on individuals and organizations he perceives to have wronged him. does wrong. —
Patrick J. Hagan, Ardmore

I was very disappointed that ABC and CBS did not show the Soul of the Nation president’s speech. Instead, they showed Young Sheldon and Press Your Luck.

I guess their leaders deemed these silly shows more important in the current political climate than highlighting the leader of our nation, who has focused on the importance of maintaining our democracy. In light of what is happening in our country and in the city of Philadelphia, the leaders of these stations should have taken the half hour to broadcast President Joe Biden and his sincere efforts to preserve our freedoms. Moreover, the address occurred at the cradle of our country. Yet another missed opportunity by these stations to showcase the importance of our historic city to our constitutional government. Shame on them! — K. Pauza, Bucks County

Sunday’s story of rising fatal opioid overdoses in Philadelphia, particularly among black residents, reflects the sad state of Pennsylvania’s treatment of people with opioid use disorders. This trend will likely continue if addiction is treated as a crime and not as a disease. People with opioid use disorders are not getting the medical help and community support they need to survive. Laws that criminalize addiction and a health care system that makes opioid prescriptions unaffordable drive people to take to the streets for needles and drugs, often resulting in deaths. Our lawmakers should support laws that decriminalize drug addiction and treat it as a disease so people can get help. Putting our tax money into drug addiction lawsuits and penalties doesn’t help the problem. Providing safe supplies of opioids to people can save lives. — Laurie R. Jubelirer, Ambler

Join the conversation: send letters to [email protected]. Limit the length to 150 words and include home address and daytime and evening phone number. Letters appear in The Inquirer six days a week on the editorial pages and online.