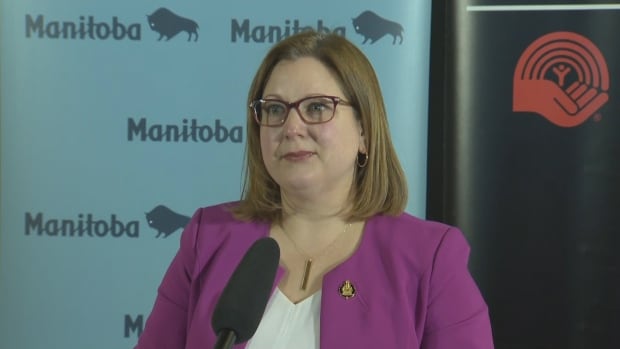 Too many Manitobans are struggling to access the mental health supports they need, but the province says it has a five-year plan to change that.

On Thursday, Mental Health Minister Sarah Guillemard unveiled the outline of a new approach to delivering mental health services in the province.

The Progressive Conservative government is also pledging $23.7 million to support existing programs and $17.1 million for new initiatives in the first year of the plan.

“Most of us have had times when we have struggled, or know someone who has struggled with their mental well-being during this pandemic,” Guillemard said at a press conference on Thursday. at the River Point Centre, an addiction treatment center in Winnipeg.

“Today’s announcement is important to me, not only as a minister, but also as a Manitoban who has experienced some of the barriers to accessing supports.”

Guillemard said the first year of the program will focus on improving existing core services, such as counseling and addiction services and supports for young people.

“What we anticipate…is that people who have needs and use the system ‘will find it’ to be ‘easier, more accessible,'” she said.

“We anticipate that we will see the waiting list shrink, obviously, as more services are made available to those who seek them.”

The strategy is informed by 3,000 Manitobans who participated in a consultation process launched last summer.

In particular, the five-year vision will establish new criteria to ensure that more Manitobans qualify for assistance and are not turned away.

The province is committed to developing a coordinated response to prevent suicide, launch a strategy to eradicate the stigma around mental health, and reduce people’s addiction to tobacco and vaping through cessation and control initiatives.

The province also says patient records will be kept electronically, so a person won’t be required to recite their struggles to every medical professional they meet.

“With each new visit, I spent most of the time repeating my story,” said an anonymous person quoted in the government strategy document. “It made it difficult to progress.”

Manitoba will also follow through on its previously announced commitment to develop a diabetes prevention strategy.

In addition, the province has pledged to support the creation of culturally relevant programs and services for Indigenous peoples.

There will also be a concerted effort to reduce the incidence of chronic diseases, as they may impact the health care system in the future, according to the province.

A Winnipeg clinical psychologist said the province’s strategy lacked detail and did not do enough to meet the needs of the mental health system.

Rehman Abdulrehman said if there was a similar attempt to reform the system to take care of physical health, it would be much more comprehensive.

Such a strategy would cite the different health professionals involved, the reforms needed in emergency departments and the number of beds, among other categories, he said.

The mental health plan “makes me think there’s either a lack of awareness or a lack of sincerity or intent, because we don’t have that specificity here,” Abdulrehman said.

The 30-page strategy document also does not mention how it will achieve its goals, such as navigating the system, he said.

Asked about the vagueness of the province’s strategy, Guillemard said the purpose of Thursday’s announcement was to introduce the framework of the five-year plan. More announcements will follow, she said.

Rita Chahal, executive director of the Mood Disorders Association of Manitoba, said she was encouraged to hear the government recognize its gaps in the mental health care continuum.

When her organization was consulted, she spoke of gaps in youth services and supports for Aboriginal and rural Manitobans. She said the strategy highlights all of these areas.

“We are very happy to hear that the government and, in particular, this ministry have heard the voices and concerns, suggestions or recommendations that the sector has provided to them,” Chahal said.

She hopes the government’s strategy will deliver the mental health improvements it promises.

Over the past several years, the Manitoba government has released numerous reports addressing the failures of the mental health system, including the 2018 Virgo report and Dr. David Peachey’s 2017 findings which advised that reducing emergency departments to Winnipeg from six to three.

If you are having suicidal thoughts or are having a mental health crisis, there is help. Contact the Manitoba Suicide Prevention and Support Line toll-free at 1-877-435-7170 (1-877-HELP170) or Kids Help Phone at 1-800-668-6868. You can also text CONNECT to 686868 and get immediate support from a crisis responder through the Crisis Text Line, powered by Kids Help Phone.

A little trash can be a big problem if it’s thrown along the roads of Pa.